Google wants to change rules for ads in Australia 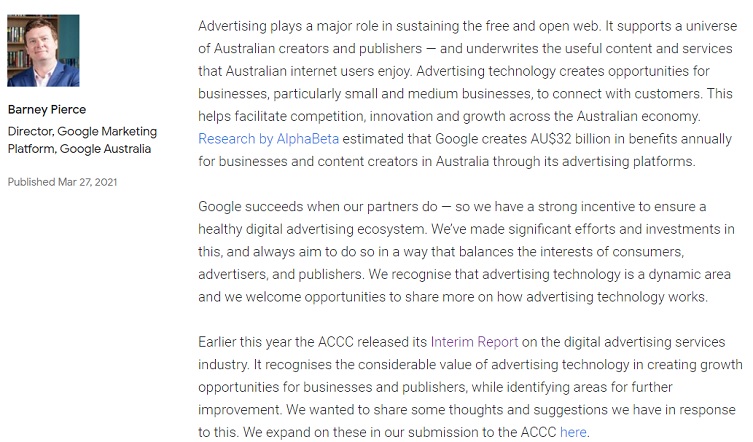 Barney Pierce published a blog and expresses Google’s wish to change rules for ads in Australia. Pierce is Director, Google Marketing Platform, Google Australia. In a blog post published today, but dated Mar 27, 2021, he brought a regulatory approach for the official recommendations.

The Australian Competition and Consumer Commission (ACCC) published the “Digital advertising services inquiry,” at the end of January.

According to ACCC, publishers, advertisers and consumers suffer because of lack of competition and transparency in the digital advertising. So, the authorities decided to address it.

“There is a real lack of competition, choice and transparency in this industry,” Rod Sims, ACCC Chair, mentioned. As a result, “these issues add to the cost of advertising for businesses.” So, he concluded, “these impact the prices paid by consumers.”

As a reply, Google shows the benefits its advertising platform creates for companies and content creators in Australia. “We wanted to share some thoughts and suggestions we have in response to this,” Pierce said.

So, it wants to change the rules for ads that should become compulsory.

What Google stands for

In its blog post, the giant comes with six “key factors” that ACCC should consider when developing its final recommendations.

Google pleads for “a collaborative approach”

In his blog post Pierce mentions that the company he represents supports the suggestions for “industry-led initiatives.”

In his post, Pierce says that the industry participants better understand the technology, dynamics and consequences of any intervention. As a result, “We are confident that a collaborative approach will benefit consumers and businesses in Australia.”

Also, he emphasizes that the company is ready to constructively participate “in the ACCC’s Ad Tech Inquiry process.”

Google threatened at the beginning that it would turn off its search engine in Australia if the ACCC’s rules become mandatory. It even blocked some news websites. Then, as it could not completely avoid the news media code, it changed its mind. We will see if the authorities will considered the requests.