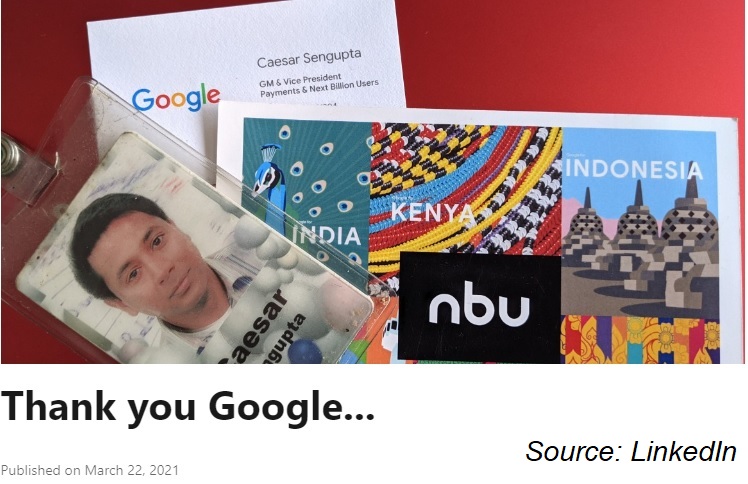 Caesar Sengupta, who led the Next Billion Users initiative for Google, is leaving the company next month. He also led Google’s payments business in the last 15 years.

People outside the company know him as the head of the Next Billion Users initiative. This should make internet and services accessible to users in emerging markets.

Using its Next Billion Users and Payments initiative, Google brought internet connectivity to many railway stations. Then, it closed this programme.

As part of the same initiative, it launched Google Pay in India – the Tez wallet. Also, it built Android Go, Kormo Jobs and Files apps.

Still, before becoming the head of the unit, he used to be a VP and Product Lead. He was in charge with the company’s desktop operating system, ChromeOS, that powers Chromebooks.

A Google spokesperson talked about the head’s choice. “He has made a personal decision to leave the company and start something entrepreneurial outside of Google,” they said.

The spokesperson also mentioned that “We are excited to see what he builds next and wish him the best in his new journey.”

As a good bye message, Sengupta sent an email for his colleagues. “To the many, many Googlers working in Africa, APAC, LATAM and MENA, it has been inspiring to hear your voices take more weight in the products Google builds,” he said. Then, he added that “I know there is so much more work to do.”

His choice was to also share the message on LinkedIn, with a piece of his message for each of teams he worked with.

He also wanted to emphasize that “we are light years ahead of where we were just a short time ago.” Then, he mentioned the digitalization of economies and increase of Google’s investments.